Have you heard of 'rewilding"? This is an organized effort to restore wildlife to an area or habit where they belong. When I first heard/read about the dramatically successful program to restore wolves to Yellowstone National Park my first thought (after gratitude) was that this needs to be a picture book. I was not alone with that thought, obviously, and this book is a worthy representation of the remarkable wolves, the program, and the significant impact the wolves have had on restoring THE PARK ITSELF and its other native species to a more sustainable (and original) environmental balance. 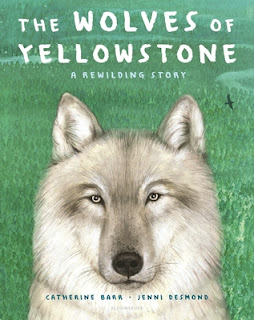 THE WOLVES OF YELLOWSTONE: A Rewilding Story is written by Catherine Barr and illustrated by Jenni Desmond.

With straightforward text that is readable and speaks clearly about every step in the process, the text and the illustrations reveal the imbalances that developed in this particular national park after wolves were eliminated there. Early pages reveal the complex teams and intricate teamwork needed to safely transport and successfully adapt Canadian wolves to the park. The wolves were each tagged and monitored, their movements and actions recorded, analyzed, and reported.
There are equally informative and fascinating details about the wolves' adjustments over time, including how individual and entire packs adapted and expanded. They were not artificially confined to the park . Efforts were made to inform nearby stock owners about the value of the wolves natural lives within the park, but some were killed once they crossed those lines. Despite that, their successful existence  and expansion generated changes in the park's deer and other herds, in beaver activity, and in other significant aspects of wildlife. The combination of those shifts eventually reshaped rivers, repopulated some species and reduced other overgrown herds, and helping to restore the park ecosystem to the patterns of nature.Such an intricate process over long spans of time are not easily explored in a picture book, m and yet this creative pair accomplished it  with grace and accuracy.
For more examples and details about this process in many settings and species, check out a more advanced picture book: REWILDING: Bringing Wildlife Back Where It Belongs by David A Steen and illustrated by Chiara Fedele.
Steen is a herpetologist and it shows in this expensive view of the rewilding process across all animal kingdoms and global habitats. I recommend this for established readers who care about the EARTH.  In fact, for those who don't express interest or concern, these two titles might be just the ticket to a new and invested attitude.
Both are among the CYBILS NONFICTION AWARD nominees for 2022. Check out these and other nominees in the extensive list HERE.
Posted by Sandy Brehl at 10:11 AM