The 2012 London Olympic Games are officially underway!
In recent posts some notable Olympic winners of the past were featured, including Dr. Sammy Lee, Wilma Rudolph, and Michael Jordan.
A spring release from Boyds Mills Press features the first African American woman to win an Olympic Gold Medal. Her story is told in QUEEN OF THE TRACK: Alice Coachman, Olympic High Jump Champion, by Heather Lang, illustrated by award-winning Floyd Cooper. 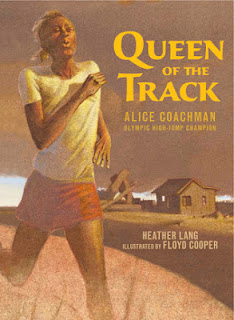 Alice grew up in the South in a time when race and gender defined you, restricted your options, and narrowed your horizons.

Unless you were Alice Coachman.

She shot hoops with the boys, created high jumps with sticks and rags, and succeeded far beyond anyone's expectations. Her running, jumping, nearly flying legs broke records and won championships. They also carried her  from a time and place in which water fountains and bathrooms were segregated to standing on the podium in London and shaking the hand of the King of England.
More extensive reviews of this accessible, detailed biography can be found in The Denver Post and the NonFiction Detectives blog.

I'm very pleased that both  Heather Lang and Floyd Cooper were kind enough to participate in an interview about this book. Their combined responses created a longer post than usual, but I think you'll agree it's worth it.

The timing of the release of this book is ideal- spring of the Summer Olympic season, taking place in London for the first time since Alice Coachman was there in 1948. Was it always your intention to create an "Olympics season" story?

Heather: I wish I could say that I was super savvy and this was all planned! The truth is—the timing of the Olympics and the fact that the 2012 Olympics are in London again was just one of those happy coincidences. I began searching for a sport heroine to write about in 2008, and it wasn’t until I was well into the research and had done some writing that I made the connection. I screamed out loud and did a happy dance. And then I was a little embarrassed that I hadn’t figured it out earlier.Floyd: For me, the art took about a month to complete. There were other deadlines on the plate and travel so the actual, real time was about 6 months.

Can you describe your approach to research for this project?

Heather: I first came across Alice Coachman while reading about famous female firsts. My immediate reaction was: if she’s famous why haven’t I heard of her before? She was the first African American woman to win an Olympic gold medal. She overcame poverty and discrimination. She paved the way for Wilma Rudolph. How was it possible that I’d never heard of Alice Coachman?

I began by doing some general research online and in the library. I was struck immediately by Alice’s spirit and determination in the face of so many obstacles. I could imagine her story so well in the picture book format—running barefoot and making her own jumps out of sticks and rags. At that point I knew I had to try to contact her or her family. Her son replied to my email and agreed to help. He called his mom any time I had questions he couldn’t answer and reviewed the manuscript for accuracy. My library tracked down a copy of a privately printed adult biography about Alice. I sifted through newspaper articles and conducted historical research about the Olympics and the South. There are also some fabulous video interviews with Alice online. All of these sources helped me determine how best to focus the story.

Then I began writing. But the research didn’t end there. New questions came up and facts needed clarifying. For example I came across conflicting information about whether the landing pit at the Olympics was filled with sand or sawdust. This was in the very early days of broadcast television, so I couldn’t verify this with video footage. Alice thought it was sand, but she wasn’t positive. This became a treasure hunt, which eventually led me to an Olympic historian in England. She got confirmation from silver medalist Dorothy Tyler that the landing pit was filled with sand.

Floyd, were you aware of Alice Coachman's story before receiving this assignment?
Floyd: I was not! That is why I love my job- it is always a learning experience. Primarily, (my research relied on) the internet. Heather Lang, the author, sent me an amazing bio book about Alice along with her story of Alice. That was very helpful.


Heather, did your research yield information that had to be left out of the biography?
Heather: Oh yes! I have a big fat binder of research. The hardest part about writing a picture book is leaving out so many golden nuggets. But if the nugget doesn’t serve the story, then it has to go. For example, Alice liked to have a lemon with her when she was jumping. She would squeeze a little juice in her mouth to quench her thirst and it wouldn’t weigh her down like other drinks would. She referred to them as her “lucky lemons.” In an early draft I included the lemons. Even though I knew deep down they were distracting, I liked them! I tried to squeeze them into this story about determination and perseverance. As soon as I acknowledged that the lemons were just clogging up the story and had to go, the story flowed much better. Luckily my publisher made QUEEN OF THE TRACK a 40-page book, so I was able to include lots of golden nuggets in the endnotes.


Floyd, was anything particularly satisfying or frustrating while working on this project?
Floyd: Creating the art itself was “particularly satisfying” for me, knowing that I was helping to depict for many new readers the story of one of America’s heroes and contribute to her incredible legacy. 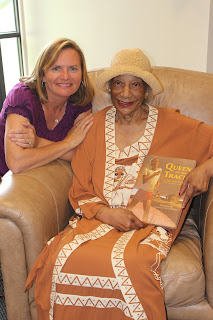 Heather, you shared this photo of Alice Coachman and you. Would you tell us something about that meeting?


Heather: It was a thrill to finally meet Alice in June. Her family generously invited me to join them for a few days in Albany while she was being interviewed and photographed for Time Magazine and the New York Times. During our time together, we sat and looked through the book together and talked further about some of those memories. We discussed her days in Albany and London. She is a very special lady with a great spirit and a wonderful sense of humor.


The book jacket notes about each of you noted background in track and field-related activities. Did you find your emotional/physical experiences participating or competing affected your approach to this project?

Heather: As a child I played almost every sport and was very competitive. Some of that came from having a twin brother who I always wanted to beat. Like Alice, I played sports with the boys at recess, and in high school I played on the volleyball, softball, and tennis teams. I loved the thrill of competing, and winning was fun, too. These experiences and emotions allowed me to relate to that part of Alice’s emotional journey.
Floyd: I did not rely too heavily on any such experiences as I have blocked this particular torture from memory!


I'm sure readers would enjoy hearing any take-away thoughts you'd share about working on this project.
Heather: While most of us will never face the adversity that Alice Coachman faced, I think we can all relate to having dreams and facing obstacles. Her story teaches us all to dream and to never give up on those dreams. As an unpublished writer who had received plenty of rejections, she inspired me to keep on going. I followed her advice as I worked on her story: “When the going gets tough and you feel like throwing your hands in the air, listen to that voice that tells you ‘Keep going. Hang in there.’ Guts and determination will pull you through.”


Floyd: Alice Coachman’s life story reminds us of the power of determination and perseverance when applied to the pursuit of our dreams.

Thank you both for sharing your insights about creating Alice Coachman's biography. It deserves the current attention it is receiving due to the Olympic/London connection, but I am confident it will continue to appeal, inform, and inspire for decades to come.

Heather Lang's website offers a complete personal profile, but in summary she says:
"I never gave much thought to what I wanted to be when I grew up until fourth grade when I read HARRIET THE SPY by Louise Fitzhugh. That's when I decided I wanted to be a spy. That's also when I started writing. I kept a top secret journal, just like Harriet. Since then I have always loved research and writing. For that reason I'm not surprised I initially chose law as a career. Honestly I never thought of being a children's book author until I started reading books with my kids. Once I started down that path, I knew it was my dream job. It combines all the things I have always liked--research, writing, and spying!
I also volunteer and write web articles for the National Children's Book and Literacy Alliance's website."

Floyd's bio link offers many interesting details, too. His illustration awards are extensive, but his note about creating books for children is even more impressive to me:


"Giving kids a positive alternative to counteract the negative impact of what is conveyed in today's media is a huge opportunity."


Last week's Time Magazine and a New York Times Sports feature this week on the 1948 American Olympians, including, of course, Alice Coachman. This title was included in the People Magazine's summer picks for kids.
Posted by Sandy Brehl at 10:33 AM