Capybaras are having a moment in picture books, so it makes sense to interview one, right?

SB: Excuse me, Ms. Capybara, would you introduce yourself to our readers on behalf of your species?

Ms. Capybara: Certainly, but you must not be from South America, right? You North Americans are all about squirrels and chipmunks and beavers and such, but folks in the southern half of this hemisphere know us well. I should start with basic facts, I suppose, which you could have found easily on your own. Sources as simple as National Geographic would tell you this much, and more: 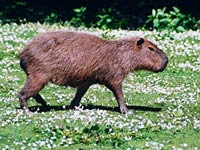 Since a picture is worth a thousand words, here's one of my relatives, pictured at ANIMALSTOWN.com where you can find a video and lots more kid-friendly information about us.
I'll leave you to it, if you are curious to learn more, because I hear my herd calling.
Before I go, though, may I just say that this recent
attention in picture books and popular culture is long overdue, and we hope the momentum will continue. After all, meerkats had center stage for decades, and we are definitely ready for our prime time appearances!
SB: Thanks for your time, Ms. C. I'll see what i can do to win you some fans and keep the spotlight and curiosity at full power.
THE CAPYBARAS is written and illustrated by Alfredo Soderguit, a creator with experience in animated films and more than forty picture books to his credit.
The synopsis of this story begins with scenes of domestic bliss within a chicken coop, where everything is predictable and "safe", with clear expectations. The dry and subtle humor begins in an early scene with the line "...nothing out of the ordinary ever happened",  despite one chicken being carried away, suspended by her legs, while her unaware flock remains oblivious to the implications.
When a herd of capybaras swim up to the coop, seeking refuge, the chickens lay down the law- forbidding access to those who are so "different", claiming damage would be done by allowing them in, even when the capybaras report they must escape to save their lives during hunting season.
In a perfectly revealed development, a little chick and a little capybara make friends, playing happily, but are soon separated by the vigilant chickens with a reminder of "no exceptions". When the little chick squeezes past the fence and is threatened by the omnipresent and underfed guard dog, her little capybara friend helps her escape by carrying her out into the water.
The resolve at first feels predicable, as the grateful flock share their spaces and resources freely, and eventually their trust and friendship. Then, when hunting season has ended, the expected departure of the herd of capybaras adds a subtle and sensitive twist that involves their newly expanded community.
Using minimal text and limited colors, Soderguit has created a cast of familiar and unfamiliar animal characters that share some highly recognizable traits and needs with humans. This delightful picture book all appeal to the youngest of children, but also holds a wealth of depth and discussion potential for teens and beyond. I hope it will find readers across all ages, because I have no doubt that those who meet these two animal groups in conflict will quickly agree with the summary in a Kirkus starred review: "PURELY EXQUISITE!"
Now, about that "moment" these capybaras are having, here are a few others you may want to check out. (I hope you will!)
I AM A CAPYBARA, by Michela Fabbri (Princeton Architectural Press, 2020)
CAPYBOPPY, by Bill Peet. (Clarion Books, 1985- an early-adopter!)
Many nonfiction/photo titles and coloring books are readily available, too.
I am certainly the last person anyone would turn to for advice on pop culture and/or trends, except, perhaps, when it comes to picture books. So I'll confidently assert that THE CAPYBARAS is worth your time, and is likely to send you searching for more, as it did for me.