The Miracle and Magic of Picture Books: Herve Tullet

When PRESS HERE by Herve Tullet first appeared at a Children's Literature Conference in Europe (Bologna Book Fair? Can't quite recall), Publishers Weekly reported that crowds gathered around. Adults were waiting turns to get their hands on it for themselves.
In the three years since that introduction to the world, PRESS HERE has remained on the New York Times Children's Bestseller list continuously. The extensive and glowing words of praise in reviews for this book, one with brief and simple text, indicate what a remarkable achievement this book is.

That's why the bar is so incredibly high for any book attempting something similar, even if its creator is the one and only Herve Tullet himself.

In the case of Tullet's recent MIX IT UP  the magical interactivity is only the start of the fun. In this "app without batteries" early concepts of primary and secondary colors, blending, shades and tones set the stage for engagement, exploration, prediction, and creativity. Just as the adults who viewed PRESS HERE for the first time responded with childlike wonder, kids and adults alike will find their fingers ITCHING for paints and papers, or walls, sidewalks, or any other surface on which to "LOOK, PLAY, and MIX IT UP" on their own.

In an article in American Psychological Association titled UNRAVELING NEW MEDIA'S EFFECTS ON CHILDREN the question of screen-time-impact is considered. Unfortunately, most studies (except for those conducted by APP producers) suggest the effects are AT LEAST as negative as they are positive, especially in the youngest children. Media and access are accelerating  more rapidly than we can imagine, but changes in human developmental can't begin to keep up.


Whether you're an advocate for appropriate early childhood development or not, do yourself a favor and get this (these) book(s) for a child you know and care about. The HUGE bonus will be that you get to read them for yourself without waiting in line. I'm guessing they'll be among your child's favorites, and yours, too!

Some books defy categorization. They appear to be meant for children, but they find and burrow into the hearts of adults, holding a place bordering on sacred. Some feel that way about THE VELVETEEN RABBIT, THE GIVING TREE, and THE LITTLE PRINCE. 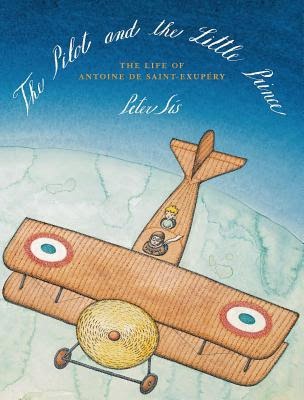 No one in their right might would try to "mess around" with titles like these, right?
Take a look at this remarkable approach to that very challenge in THE PILOT AND THE LITTLE PRINCE, by author/illustrator PETER SIS.
Leave it to Peter Sis to take an iconic, ethereal story, one that holds a mythic place in many minds. He manages to capture that essence within the facts of the author's life. The images, book design, moods and tones of this book merit the same careful reading and reflection that we give to "The Little Prince".
Adults who love it may struggle with the tiny, delicate side notes, and may long for more detailed author notes, but young readers won't mind a bit. The varied text styles, gossamer illustrations, colors, and moods will be savored by young readers, even those so young that the biographic content is beyond their understanding. Don't miss it.

Now, back down to earth with SOME BUGS, written by Angela DiTerlizzi and illustrated by Brendan Wenzel.

Colors of the Wind: The Story of a Blind Artist and Champion Runner


Back-to-school was a time of conflict for me when it came to selecting read-alouds in the early days. How to choose among SO MANY titles, each so powerful and engaging, each for different reasons? I could hardly wait to share them all. Given my druthers I'd have spent all the first days of school alternating between read-aloud and silent reading ALL DAY LONG, every day.
That's unrealistic, so I compromised by finding countless ways to feature important titles throughout the day, ALL YEAR LONG.

When new titles crossed my path I judged when and how I could share them with my students. Some were book-talked, some displayed with "new additions", and the best were read aloud.
COLORS OF THE WIND, The Story of Blind Artist and Champion Runner George Mendoza, by J. L. Powers,  is just such a book.  It's illustrated by the paintings of Geroge Mendoza, the subject of this book, with line drawings by Hayley Morgan-Sanders effectively incorporating small segments of his paintings on each text page. This biography is unlike any other I've read, yet it has a quality shared by the best: it inspires.

The title and subtitle give the facts, but the crisp, spare text, vibrant paintings, and inset line images are even more powerful than the facts.The backmatter elaborates on the details and includes photos of George Mendoza running and painting, which makes this an excellent title to use with older readers as well as young. His life choices and successes clarify that blind does not necessarily mean sightless, while the story makes it clear that differently-abled is not the same as disabled. His sight may have been impaired by a degenerative disease, but his vision is pure and inspiring. Life's circumstances are beyond our control, but the paths we follow in those circumstances are choices we DO make. George's choices are inspiring and as brilliant as his art.The visual impact of Mendoza's art is made even more impressive by the story of how he was inspired to attempt painting.

The titles I featured during the course of the year had no lack of intriguing and impressive characters, but this one earns a place on the list. I've shared thoughts about others in previous posts, including sports figures (here, and here) artists (here, here, and here) as well as differences in abilities (here).

Now my choice is to share this title with other teachers and families in hopes that they will find a place for it in their reading lives. Mendoza's story isn't one that's made the headlines, but it's a perfect example of the truth that fame does not equate with significance or value.

Something to think about, right? If you agree, please help spread the word about this new release.

Email ThisBlogThis!Share to TwitterShare to FacebookShare to Pinterest
Labels: artist, Colors of the Wind, differences, George Mendoza, J. L. Powers, sports
Newer Posts Older Posts Home
Subscribe to: Posts (Atom)
Picture books are as versatile and diverse as the readers who enjoy them. Join me to explore the wacky, wonderful, challenging and changing world of picture books.