A Father's Day Salute to the Funnies


***blush*** I was so excited about celebrating Father's Day, comics, and the great graphic novels discussions that this popped out a week early. Dads deserve a full week of love, don't ya' think?***

The funnies, that's what we called the comics in the paper, especially the multi-paged full-
color ones on Sunday mornings.

When I was young, Sunday mornings followed a comfortable routine. Our whole family dressed up for church and walked down the block together. Afterwords, Dad gave Mom the morning off and made a big pancake breakfast. He even cleaned up after himself, until we were old enough to help. He was a pancake-making expert, but that’s a different story.

That's when it was time to relax in the living room. The big Sunday paper, the Columbus Dispatch, was loaded with sections for Mom and Dad to read, but we wouldn’t give Dad any peace until he read us the funnies.

His chair was the perfect size for all four of us. The prime spot on his knee was mine until little sis came along. Once she took over I perched on one wide arm of the chair, my sister sat on the other arm, and my brother hung over the back of the chair with his head next to Dad’s, reading over his shoulder. Settled in place with a clear view of the comics, we waited for the show to begin.

One by one, each comic strip came to life in Dad’s voice. Dick Tracy snarled his orders to his team of detectives. Prince Valiant bravely proclaimed his rights as he marched through his kingdom, sword at the ready. Dad would make Blondie and Dagwood sound just like they did in the movies, including Daisy’s occasional woofs.

Each full-color eight-panel strip was like a little movie at arm’s length. 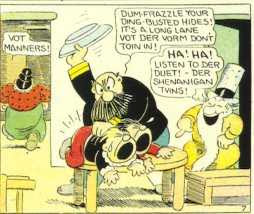 The Katzenjammer Kids are unforgettable. Coming alive in Dad's second-generation quasi-German accent, the twins, Hans and Fritz, gave Mama, the Captain, and the Inspector plenty of grief. But even when their accents sounded confusing, the pictures and expression in their voices left no doubts about their shenanigans.

When the time came to fold up the funny papers and give Dad some peace, we clung to his neck and begged, “Read them again!”

“Which one?” he’d ask, only to hear four voices calling out four favorites.

“They’re not going anywhere, you can read them yourselves now,” he’d grin, turning to the rest of the newspaper to relax.
And one by one, oldest to youngest, we’d stretch out on the floor and go at them again. Even before I learned to read, the voices were already in my head, on the page, waiting for me to enjoy a second time when it was finally my turn.

Mom and Dad shared bedtime stories daily, and I wouldn’t trade those moments for anything. But reading the Sunday funnies, huddled on Dad’s chair, smelling his Old Spice aftershave and hugging his stiff, starched collar- that happened just once a week. Bedtime stories were well-worn favorites, but the funnies were colorful and new, every week.

And the voices. The voices were so alive! Bedtime storybooks in those days had only a few spot illustrations, and characters were gentler, more familiar. The Sunday Funnies’ voices were thrilling, dramatic, goofy, and bizarre. They made themselves at home in my head, and made me hungry to hear the voices in everything I read. Thanks for the voices, Dad. (Happy Father's Day!)

Those funnies and some occasional dime comic books were the closest we came to the energy and immediacy of today's picture books. It's no surprise that we savored them, revisited them, talked about them, imitated them.

Just as kids (of all ages) still do with quality picture books.

It's also no surprise that graphic novels, illustrated narratives, and emerging hybrid-visual-narratives are exploding in popularity at every age level. 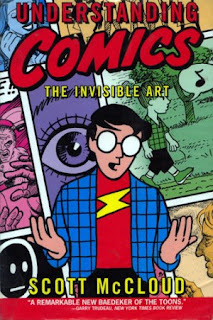 A recent post on the Teach Mentor Text blog addresses the value and appeal of graphic novels and other illustrated narratives. For even more opinions check out the May #titletalk chat archive on Twitter for a discussion of the use, quality, and validity of these in the world of children's literature. If you have the slightest doubt that reading comics demands mindful and complex thinking, read Scott McCloud's iconic book, Understanding Comics: The Invisible Art.

When you have the time, explore the page I've added about graphic novels, illustrated narratives, and hybrids. It features several outstanding titles and provides links to online resources.

Do you have memories of reading the "funny papers"? I'd love to hear about them.
Posted by Sandy Brehl at 5:25 AM