This latest offering by a talented researcher/author reveals information about an unknown/unsung woman of the American Revolutionary War. Anderson's writing provides efficient, lyrical narrative, rich with authentic details. Research from a range of sources is woven into a reliable and compelling portrait of the life of Deborah Sampson. Because data gaps and conflicting information left three details unverifiable, Anderson clearly states that this account is informational (or historical) fiction and that the most accepted versions of those details was used.

From the the first pages, readers learn of Deborah's early life challenges, with illustrations suggesting that even as a young child in deep poverty she dreamed of a better life, and a wider world.

On that opening spread, in large font, a central thesis is stated: Maybe it was just Deborah.

Hard facts of life surface on the next spreads leading to Deborah spending her youth without family, in service (and heavy labor) to a variety of other families. In each circumstance she worked hard, learned all she could (including to read and write), built confidence and strength in her mental and physical potential, and also notes impacted by the events and  principles of the growing colonial rebellion leading to the Declaration of independence and the Revolutionary War.

At eighteen she refused the traditional path of marriage, made a living with trade skills often reserved for men, and then disguised herself as a man and enlisted in the army to fight for freedom. But when her ruse was discovered, she ran away before she could be arrested. In another area where she was not known, she tried again and enlisted as soldier Robert Shurtliff. The following spreads show her as managing every challenge effectively, translating skills from her early service years to those required of soldiers, including taking part in battles. After being wounded, she attempted to dig out the bullet herself to avoid discovery in a medical examination. 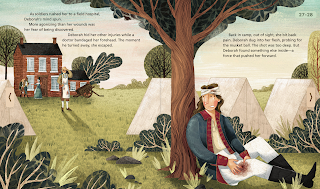 She gained respect and was advanced to service for officers, chosen for her outstanding performance in active service.

With the war nearly over, she had one last mission. But when Sampson fell ill and lay unconscious in the hospital on the brink of death, a doctor discovered her gender.  Stay tuned, there's more to come.

Gorgeous illustrations incorporate information and details that expand the compact text and the landscapes of Sampson's life at every stage. Those are physical, emotional, social, and political. Look closely at that cover art, so evocative of the time, of the complex roles Deborah chose to assume, and the radiant quality of her heroic decisions. This approach both equates and elevates her role compared to those of other soldiers of the revolution. Throughout, we see her full authentic self, the one who grew strong through adversity and hard labor, as well as a limited reflection of that within the career and service she chose despite restrictions that should have locked her into more traditional roles.

No spoilers are offered here, since I've already revealed much about this remarkable woman and book. Just know that there are substantial and exciting surprises throughout, as well as some questions raised. The important author note in back matter provides readers with some answers  and explains why others don't have easy answers.

I highly recommend this new title and urge you to read the post that will follow in a few days. Beth kindly agreed to respond to my questions about her research and writing for this important new picture book which you can read then. If the wait has you eager to know more (as I was) I guarantee it will not disappoint. While waiting, check out her interview about previous titles HERE.