Nature Speaks To Us!

I'm a lifelong fan of nature in general, and some critters in particular (See CHIRP! Chipmunk Sings for a Friend review). Birds hold a special place in my heart, including the ones featured in a new picture book by prolific and award-winning author Janet Halfmann. Not only have their distinctive songs and calls provided the background music of my entire life, but I worked for several years as a licensed wildlife rescue/rehabilitator. Many of these amazing creatures were literally my "roommates" for various periods of time. During those years I learned to recognize not only species' song patterns, but also individual variations and seasonal ones. I was even able to imitate (or approximate) many of those songs to carry on "conversations" with my temporary tenants.

That's why Halfmann's recent picture book really SPOKE (sang) to me.  WHO IS SINGING? is illustrated by Chrissy Chabot with crisp, simple images and coloration that are particularly useful for younger audiences at the first stages of bird observation and identification. This new offering is  a sort of "first field guide" for little ones with little hands, big ears, and enormous curiosity about the world.

Halfmann limits her choices to some of the most familiar birds in the midwest (and much of the country), each of which still has large populations that can be found in urban, suburban, and rural locations. She also provides a winning pattern of question/response for page turns. The opening question includes a "readable" translation of familiar birdsong, followed by a page turn that depicts the bird interacting within typical habitat, including food/prey, diurnal/nocturnal setting, and some typical behavior. 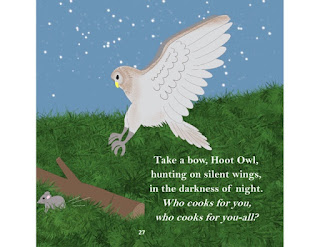 Halfmann's text patterns will also have young ones reading along and chiming in as each turn begins with the phrase, "Take a bow... " then repeats the bird's name. Those few lines incorporate the visual content regarding habitat, food, and species patterns.

As is typical in many of Halfmann's nature-focused titles, back matter includes useful learning content and ideas for activities. In this case, the content mentions the ways these "worded" songs were selected, that other wordings exist, and suggests ideas about creating our own versions of recognizable birdsong. It's easy to hear some of thesbirdsonge on YouTube. Just search for BIRDSONG. Share this delightful book with little ones, then take them, and yourselves, out into the wide world and LISTEN!

This may be a useful tool to introduce young ones to the joy and science of nature observation. You might prefer to start with Halfmann's nonfiction title, GRANDMA IS A SLOWPOKE, or similar titles, reviewed HERE during EARTH WEEK. Either way, this new, bright, and lively book feels invaluable in the process of raising a generation who are attuned to and respectful of the natural world, connecting with and investing in preserving nature for the generations to follow. 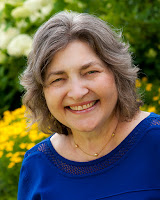 Check out Halfmann's many other titles at her website, and stay tuned for countless more that will follow in the months and years ahead.

This includes her very recent YAY FOR BIG BROTHERS! (Arbordale, 2021), another info-packed, kid-friendly, colorful look at the natural world with added fun in the back pages (also available in Spanish!)