Standing on the Shoulders of History

This week marked the 57th inauguration of an American president. Commentators from all points of view on the political spectrum noted the significance of our peaceful transition of power. Compared to ancient civilizations, the United States is still in its youth, but as a working democracy in modern times we are the forerunners of many others that followed.
When taking the oath of office, Obama rested his hand on bibles that belonged to Abraham Lincoln and Martin Luther King, Jr. The significance and symbolism of that led me to prepare this feature and postpone for now the one I had planned.

More books have been written about these these two historic figures than about any other Americans, but two titles are deserving of a lingering look. Both are illustrated with luminous paintings by Kadir Nelson. Even a quick glance at his website and the picture books he has illustrated reveals his artistic and interpretive talent and and his affinity for portraying the essence of historic leaders.

I HAVE A DREAM by Dr. Martin Luther King, Jr. is a picture book/CD combination. Most books with its twelve-by-twelve inch format would be described as oversized, but in this case it is right-sized. King's iconic speech and his stirring delivery have been replayed so often that at least snippets of it are recognizable to every generation. Although I didn't attend the event, I lived in that time and was aware that history was being made. Everyone was, whether they liked the direction in which he was leading the country or not. Nelson captures the density and intensity of King's words, phrase by phrase, on lush double-page spreads. The accompanying CD is the official recording of King's speech on that history-shaping day.

In ABE'S HONEST WORDS, by Doreen Rappaport, lyrical biographical narrative is paired with excerpts from Lincoln's writings. Some of the selections are familiar, others less so. Lincoln, like King, read widely, deeply, and often, including the bible. Both men drew strength from words, reshaping them to their times. Both men had the ability to write and speak those words compellingly, not diminishing the wisdom of those who came before but enhancing it.


On the 150th anniversary of the Emancipation Proclamation and the 50th anniversary of King's March on Washington, the use of these bibles for the inauguration was more than symbolic. It was a call to consider how we have advanced as a nation, and to honor those who helped us do so.

In my opinion both titles qualify as coffeetable books as well as picture books, inviting repeated inspection and reflection by readers of every age.

Are there other Lincoln and King picture books among your favorites?

Posted by Sandy Brehl at 6:44 AM No comments:

Poems That Squeak, Soar, and ROAR!

Picture a child you know (or have ever known, including yourself) who does not love animals of one kind or another.


I'm convinced that animals are soulmates of the young, and many of us are lucky enough to not outgrow that link.
The subhead on the cover of this musst-have poetry anthology is:
200 poems with photographs that squeak, soar, and ROAR!

With poems like that and phenomenal images by some of the world's best photographers this book stands tall as a new classic and is destined to have a long shelf life.
NATIONAL GEOGRAPHIC Book of ANIMAL POETRY, with Favorites from Robert Frost, Jack Prelutsky, Emily Dickinson, and More, edited by J. Patrick Lewis, US Children's Poet Laureate, must be seen to be believed.
Start with a title page grasshopper who appears able to take on the terminator, scan the table of contents which reveals stellar poets and titles, then consider the way in which these two hundred poems have been organized:

Each section features poems by recognized literary superstars and some other surprising sources, superimposed on absolutely breathtaking photography.

The introduction by Lewis says, "This book is not for reading straight through. Pick it up any time. Choose a poem and then read it out loud: You want your ears to have as much fun as your mouth is having."
Good advice for any poetry anthology.


Yet with this book I encourage readers of any age to start at the cover and take time with it, savoring page after page, all the way through to page 169. Slowly. Let the images speak to you. Absorb the visual power captured in this book. I doubt anyone will be able to resist reading at least a few poems along the way. For example:
BUTTERFLY
What is a butterfly?
At best
He's but a caterpillar
Dressed.
-Benjamin Franklin

Whether you reach the end of the collection or not, take time for the back matter. There are pages of advice on writing your own poems, resources for further advice, a title index,  a poet index,  a first line index, and a subject index.
Finally, there is this dedication: To poets, animals, and animal poets everywhere.


The wide-ranging reach of poets included here is likely to spark an interest in reading other collections, so here's one that is a worthy place to start:


ANIMAL POEMS, by Valerie Worth with pictures by Steve Jenkins.

Since animals never fail to inspire, try writing some poems of your own. Or just write a comment here about a favorite poem or animal of your own.
Posted by Sandy Brehl at 7:00 AM No comments:

Never Too Soon for Baseball... or Too Late!

All it takes is a few days of mild January weather and some media buzz about the Baseball Hall of Fame votes and I can't resist sharing a title that was simmering on the back burner waiting for "real" spring. I was especially motivated to spread the word about this title now by the news note that  the Baseball Veterans Committee approved White, Ruppert and O’Day (a player, an owner, and an umpire)  for Hall of Fame Posthumous induction.


So, for 2014, may I offer for your consideration... ta-da!
SILENT STAR: THE STORY OF DEAF MAJOR LEAGUER WILLIAM HOY, by Bill Wise, illustrated by Adam Gustavson.
Baseball is a game of statistics, so let's start with notes from the afterward:
"Of the tens of thousands of players who have made careers in major league baseball, William Ellsworth "Dummy" Hoy* (1862-1961) ranks in the top twenty-five in all-time career statistics: stolen bases, outfielder assists, double-plays by an outfielder."
His stats continue in this informative section, and his accomplishments continue to amaze, standing up after nearly a century of competition. He was inducted in the Ohio Baseball hall of Fame in 1992 and the Cincinnati Reds Hall of Fame in 2003. In The Sporting News in 1961 (at the time of his death) Pat Harmon wrote, "His record was remarkable. In black and white, it stands with the best of all time."

Fifty-one years later, his numbers stand tall at the top of baseball's best. And yet, in this game of statistics, this sport of numbers and career records, he is not in the Baseball Hall of Fame- yet.

He was, however, among the first five people entered into the American Athletic Association of the Deaf's Hall of Fame. Although born with the ability to hear, William nearly died of meningitis at the age of three. When he recovered, the high fever left him unable to hear well enough to understand speech so he never developed the ability to speak intelligibly.

At age ten when he  attended a school for the deaf he learned to sign and finally made friends. Mostly, he played and loved baseball. He ate, slept, and dreamed baseball, even though the only deaf major leaguer at the time was a pitcher and William was an outfielder.

The excerpts and quotations above make it clear Hoy did not settle for dreams deferred. His is a story waiting for a groundswell of growing awareness, possibly fueled by social media and a kids' letter-writing campaign. When the sports writers vote next year, again likely snubbing the steroid-tainted candidates, the name William "Dummy" Hoy should make its way into the discussion, guaranteeing that he will finally get full recognition for accomplishing his baseball dreams.

Read some of the many outstanding Kirkus and Goodreads reviews of this book.

**The author points out that calling someone who was unable to speak "dumb" was conventional at that time, and Hoy preferred the nickname "Dummy" to his own name.

The name of last week's giveaway winner can be found here.

Posted by Sandy Brehl at 6:33 AM No comments:

Congratulations to the winner of my blogiversary giveaway:
Children's author Cathy Stephanic Ogren. 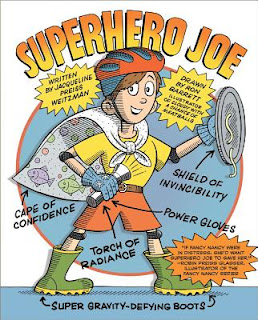 And thanks to all who participated.
Stay tuned for cute giveaway titles.
Posted by Sandy Brehl at 9:19 AM No comments:

Overcoming Fears... and a Giveaway!

And the winner is.... Cathy Stephanic Ogren! Hooray for you and your young readers.
Love it if you'd stop back and let us know how they like it.
When I was just five years old my best friend lived half a block away. We both had older siblings and made it our mission to do anything and everything they did. That included having sleepovers. The first time we tried, though, with Cricket at my house, she woke screaming in the middle of the night. Through her sobs we figured out that she had wakened, seen a white robe hanging on the back of the door, and thought it was a ghost. Even with the lights on and  the robe examined, she was convinced there was a ghost in the room. After a phone call Dad carried her home to safety. Of course we had countless sleepovers after that without incident.

This experience reminds me that the power of imagination, which we encourage and celebrate, can also work against us. A few years later, when we moved to a home with a stairway landing, my own imagination gave me some trouble. As a "morning" person I never resisted going to bed early, but it took my own superpowers to allow me to do so without asking for help. I was convinced that once the stairs disappeared from sight beyond the landing, night creatures were hiding in the walls and could reach out to grab me as I passed in the dark.
Ta-Da! I solved this my deciding that they were small creatures, so I could stay safely centered on the stairs, just out of reach from either side! I can't say I wasn't afraid anymore, but I no longer felt helpless. There were things I could do (and believe) that allowed me to reach my goal.

SUPERHERO JOE, by Jacqueline Preiss Weitzman, drawn by Ron Barrett, offers readers a similar example of how imagination can be both an enemy and a friend.

I see this book as serving a very specific purpose: empowering those kids who, by their nature, experience anxiety/fear out of proportion to reality. While there are plenty of kids who are scary-brave in their approach to life, there are many others who limit themselves through their own imagination. In a culture that requires responsible adults to be watchful and convey concerns to kids, it's no wonder some see danger at every turn.Weitzman and Barrett have tapped into this mentality with tongue-in-cheek humor, providing a model of a boy who harnesses his inner super powers to conquer his everyday fears.

To celebrate my first blogiversary, I'm giving away a copy of SUPERHERO JOE. You can enter by commenting on this post, on titles/authors you'd like to read about in the year ahead, or even sharing a time when your own imagination worked against you.